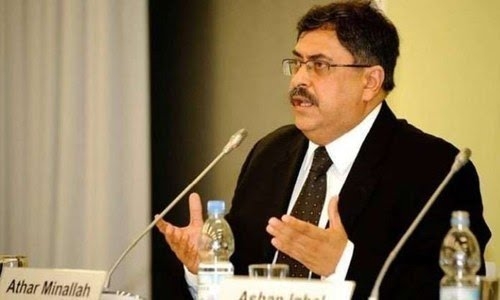 The Islamabad High Court (IHC) on Monday once again expressed concern over the "deteriorating law and order situation" in the capital after a lawyer was allegedly abducted from his home by unidentified individuals before being released two days later. Advocate Hammad Saeed Dar, who was taken away from his home in the early hours of Saturday, appeared in the court today to detail the ordeal he allegedly went through. The case was heard by IHC Chief Justice Athar Minallah, who had taken up a petition filed by Dar's father seeking his recovery. The court had earlier ordered Dar's recovery by Monday (today) in a notice to the interior secretary and Islamabad inspector general of police. Deputy Inspector General (DIG) of Police (Operations) Waqaruddin Syed, Saddar Superintendent of Police Sarfaraz Virk and SP (Investigations) Malik Naeem, and other officials were present at the hearing. Speaking to reporters at the court, Dar said the bell of his house located in the Tarnol area was rung at around 1:30am on Saturday. Around 12-15 people standing outside told his father that they wanted to meet Dar. Although only two of them were invited inside, 10 individuals allegedly forced their way into the house and apprehended Dar as soon as they spotted him, the lawyer said. He alleged that his personal belongings including his laptop and cell phone were confiscated and he was blindfolded and taken away in a car. He was driven around in the car for about half an hour before being taken to a room where he was detained. Dar said he could not identify his alleged abductors and did not know "what they wanted from me". "I said if there is a complaint or arrest warrant against me, I can present myself. [But] they didn't tell me anything," he added. Justice Minallah remarked during the hearing that no prompt action had been taken by the police and inquired if any action had been taken against the concerned station house officer (SHO). He said the "state's attitude is not correct". DIG Syed said a First Information Report was registered of the case and a show-cause notice had also been issued to the concerned SHO. Justice Minallah said that incidents of abductions were "a serious matter" and they had continued taking place without the culprits responsible being found. He asked DIG Syed to thoroughly investigate the matter in detail and make an example out of the case. DIG Syed was ordered to submit the details of the investigation report in 10 days to the court.