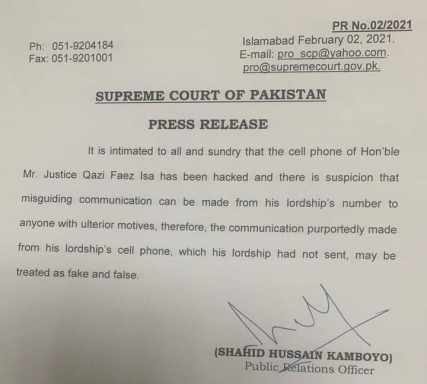 The phone of Supreme Court (SC) judge, Justice Qazi Faez Isa, has been secured after the apex court on Tuesday revealed that it had been hacked, sources said. Purportedly, the phone is now secure from the cyber attack and would not be used for “ulterior motives”. There has been no statement confirming the above provided by the SC itself at the time of filing. “The cell phone of Justice Qazi Faez Isa has been hacked and there is suspicion that misguiding communication can be made from his lordship’s number to anyone with ulterior motives,” a press release by the SC said earlier. The statement further advised people who receive any texts or information from his phone as false. It is pertinent to mention here that mobile phone hacking targetting eminent personalities has been reported previously and authorities have issued warnings against opening any messages from unknown numbers. In August 2020, a cyber-attack by Indian intelligence had been identified by the country’s intelligence agencies, according to a statement issued by the Pakistan Army. There have also been reports of a WhatsApp one-time password (OTP) scam taking place in the country recently. Purportedly, once the code is sent from a WhatsApp number, the person perpetrating the hack will get access to the target’s account. Justice Isa has practised law for over 27 years before the high courts of Pakistan, the Federal Shariat Court and the Supreme Court. He also became a member of the Balochistan High Court Bar Association, Sindh High Court Bar Association and life member of the Supreme Court Bar Association of Pakistan.